Well, it's definitely time to brighten things up a bit around here. When I scored this blazer for $1, I hadn't a clue what I'd wear with it, but eventually remembered how much I dig "alternate primaries" - combining versions of red, yellow, and blue in the same outfit. See the fantastic Sally McGraw of Already Pretty do them up here (as well as here and here and here, I suspect she likes them too), and check out another FAVOURITE-favourite blogger, Gracey of Fashion for Giants as she rocks them with super-stylish nun shoes and polka dots. Read her comments for the best nun story ever. I mean it.

I love that this get-up is somehow reminiscent of my mother's style back in the early '80s, for all that we gave each other's outfits the side-eye at the time. My giant grey flower (to coordinate with my hose, natch) would make it full-on-80s-my-Mom, and you know I almost did it, but figured that All The Big Red Accessories would be sufficient. Just. 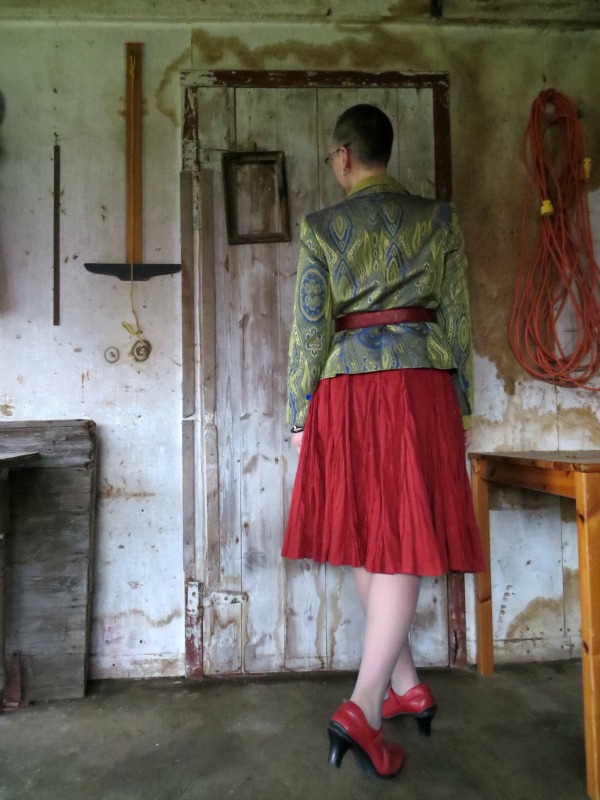 I don't usually post how much things cost unless there is something unusual about it, but this here is a particularly bargainous ensemble, especially for one so chock-full of colour happiness. (Lynn of Dylan's Dress recently thrifted an entire outfit for $1, how fabulous!)  It does not matter to me that the blazer is a Giant Tiger (Canadian discount store) label and so very likely wasn't expensive to begin with. I find the concept of caring greatly ("greatly" being the operative word) about brand / source / 'season' / trend just terribly limiting. 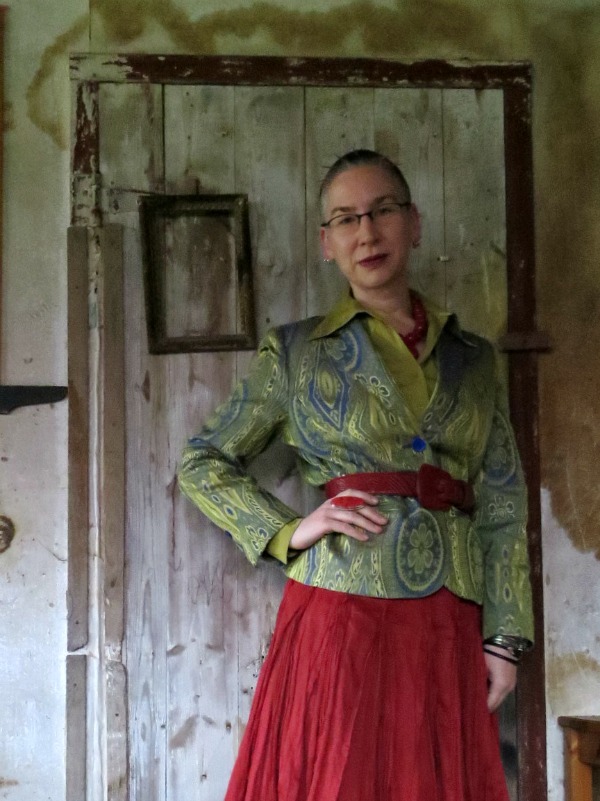 In North American-centric mainstream culture, I'd hypothesize that for lots of people, branding has come to function as a substitute for internal worth and values. I'm talking prominent logos and layers of emotional meaning attached to consumer objects which the objects do not inherently have. This makes even less sense given economic realities as well as the declining quality of new clothing, most markedly women's clothing, over the past ~10 years, as recently discussed at Une femme d'un certain age, and again at Sally's in the comments below this post. 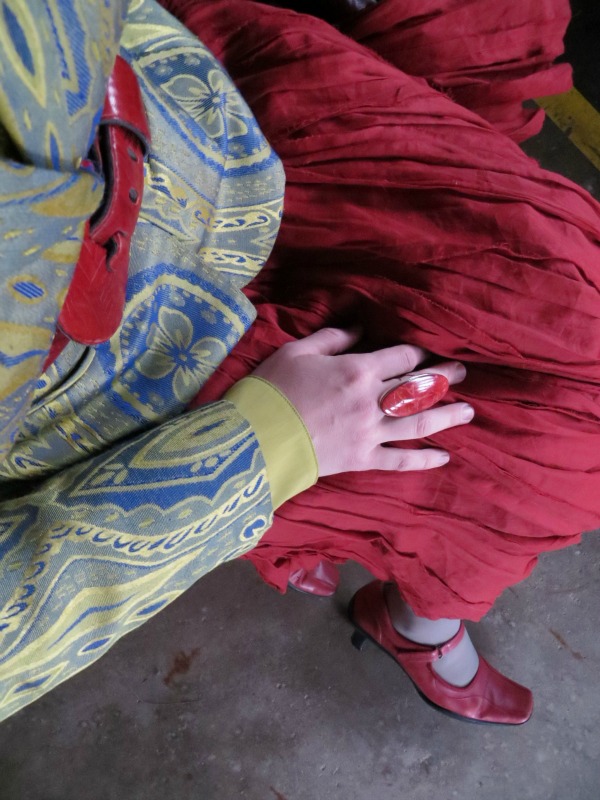 Brand can provide some information about a garment, but over the years it's becoming a less reliable indicator. Like binary gendering, human values / worth-linked brand-consciousness - regardless of its ever-greater dissociation from quality - begins at infancy, and I see it in action most frequently in young people and those in their 20s and 30s. I personally find not-caring-where-something-comes-from (except of course where there are ethical concerns) and using excellence as a North Star (which I recognize as a privilege) to be marvellously freeing. The relief of being old enough, eh? I also acknowledge - and deeply appreciate even as I maximize wherever possible - the privilege of experiencing relatively few social sanctions arising from dressing expressively as I please. 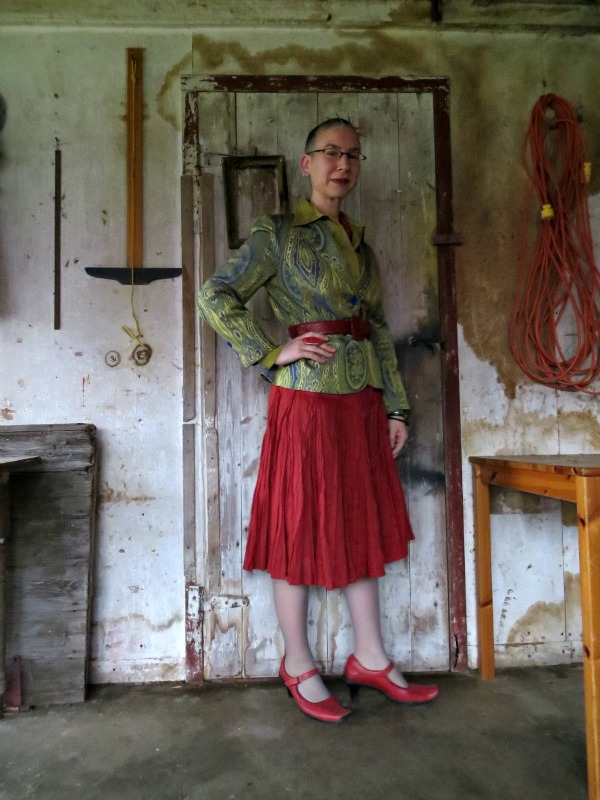 Recognizing too that many or most of y'all likely also do not give a rat's posterior about brand-name wearables or much in the way of trendiness in your excellent personal stylins (and I love you madly for it), and are in the process of consciously negotiating your own relationships with consumerism as well, I ask: When would you estimate the major points of cultural shift towards substituting ownership of branded goods for self-worth / human value-qualities to have occurred? How similar or different is the situation outside of North America? I'd make googly eyes at comments involving industrialization and the history of advertising, the movie Back to the Future, and Naomi Klein's No Logo.

Thanks for listening to me natter on! Also feel welcome to disregard the chit-chat entirely and stay for the outfits. Speaking of outfits, see you over at Patti's Not Dead Yet Style for Visible Monday!

Posted by Amber of Butane Anvil at 20:35 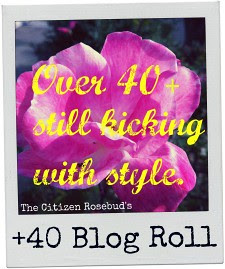 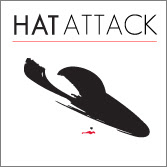 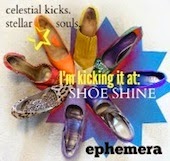 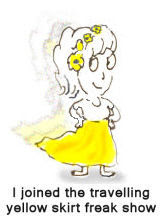 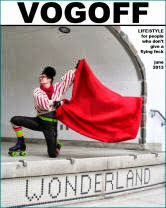 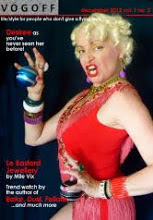 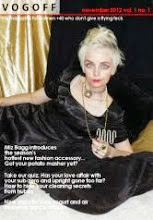 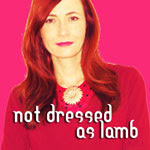